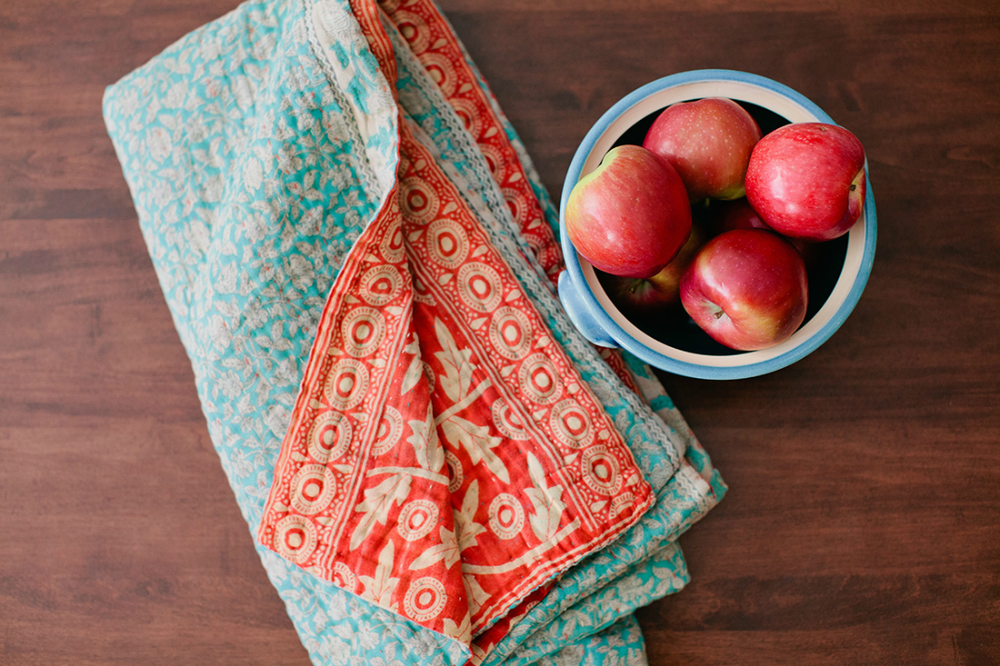 At the thrift shop where I work, we process hundreds of pounds of textiles a week by hand, sorting out the good from the bad, the clean from the stained. Inevitably, we’re left with tattered t-shirts and bedspreads that will never sell as is on the secondhand market.


This breaks my heart.

No one wants to be the person who gives up on something, the one who slams down the gavel and sentences the ratty blouse and the torn jeans to the landfill. I assume that’s why we end up with so much crap in the first place. The donor, whether intentionally or unintentionally, transfers the guilt onto us. We send as much as possible off to a regional charity that shreds fabric for use in carpets and other recycled goods, but we’re smart enough to know that a lot of what we send them will inevitably be tossed. You see, we can’t handle the guilt either. We transfer it onto them.

I spend a good amount of time scheming up ways to transform those grubby white t-shirts and holey quilts. Tie-dye? Pillow covers? But I just don’t have the time to start up a second industry, so when I see that there are others putting the work into repurposing previously loved textiles, I breathe a sigh of relief. I can’t do everything, but someone else can pick up my slack.

Today I want to talk about Kantha, one of the oldest and most beautiful forms of textile reuse… 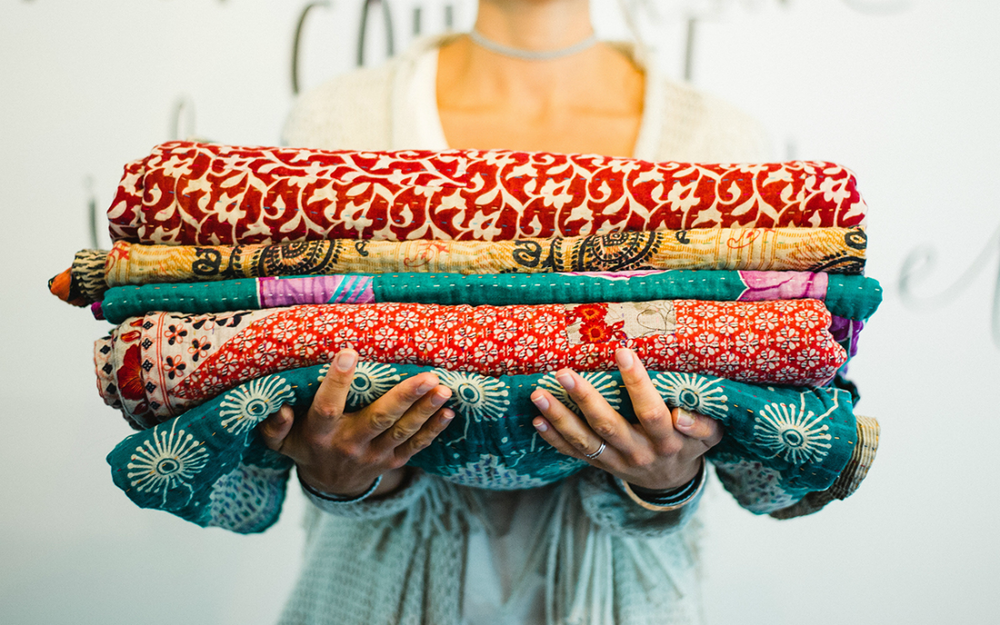 Kantha (KAHN-taa) is a type of embroidery used to repurpose old saris. The style is practiced primarily in South Asia, but specifically in the Bengal Region, where Kantha saris are worn in addition to being used in home textiles.
Etymologically, the word, kantha, has a fascinating heritage. According to Strands of Silk:

Interestingly, Kantha embroidery derives its name from the same word with two different meanings. ‘Kantha’ means ‘rags’ in Sanskrit, which reflects the fact that Kantha embroidery is made up of discarded garments or cloths. The word also means ‘throat’ and was named so due its association with the Hindu deity, Lord Shiva. The Samudra Manthan, a popular episode in Hindu mythology, describes that in order to protect the world, Lord Shiva consumed the poison that came about due to the churning of the ocean. Goddess Parvati was shocked by Lord Shiva’s actions and wrapped her hands around his neck, strangling Lord Shiva and stopping the poison in his throat, rather than allowing it to drop to the universe that is held in Lord Shiva’s stomach. The potency of the poison caused Lord Shiva’s neck and throat to turn blue, therefore giving him the moniker, Nilakantha; ‘nila’ translates to ‘blue’.

The origins of Kantha embroidery can be traced back 2, 500 years, but the current form, identified by the continual running stitch (you can see this in this post’s photos) was popularized about 500 years ago. 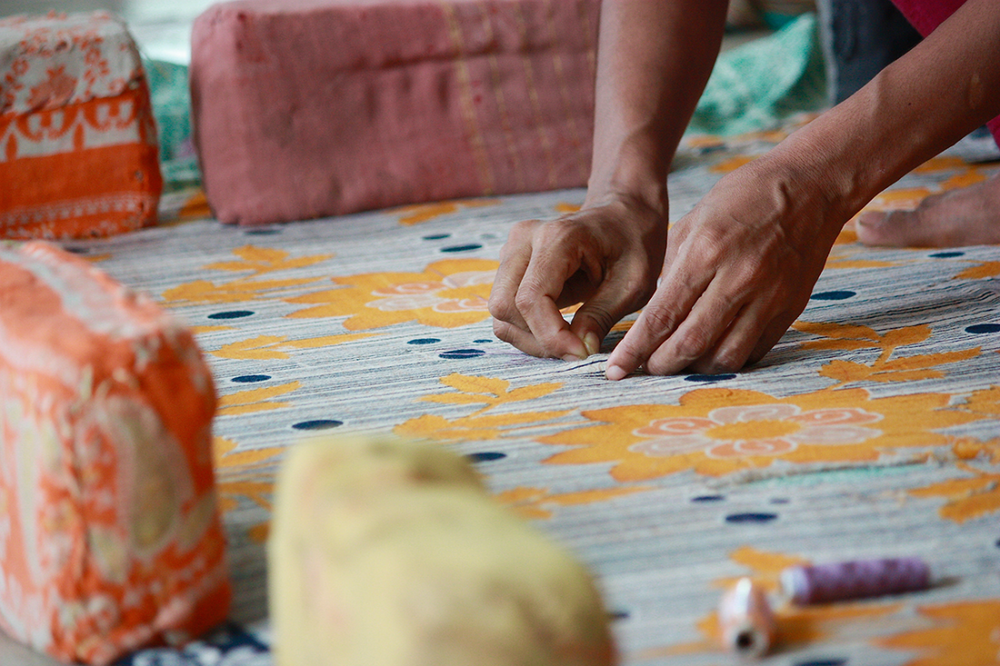 As is the case for many traditional handicrafts, Kantha had nearly died out by the mid 1900s, but thanks to efforts by the Kala Bhavana Institute of Fine Arts in the 1940s and by Shamlu Dudeja, who founded a social enterprise program called Self Help Enterprise (SHE) in the 1980s, Kantha has managed to thrive in the midst of global cultural and industrial upheaval.

Today, Kantha quilts are still made from discarded fabrics, though not always old saris, and stitched together with new thread. Occasionally, producers use natural Indigo to add dye effects to their creations.

Kantha is popular all over the world due to the beauty and rich cultural heritage of the craft. When you consider how much fabric it takes to make a single quilt, the impact of making a marketable product out of discarded textiles is pretty extraordinary. Plus, the upcycling process honors the original textile maker, the Kantha artisan, and future generations, who can live with a little less waste. 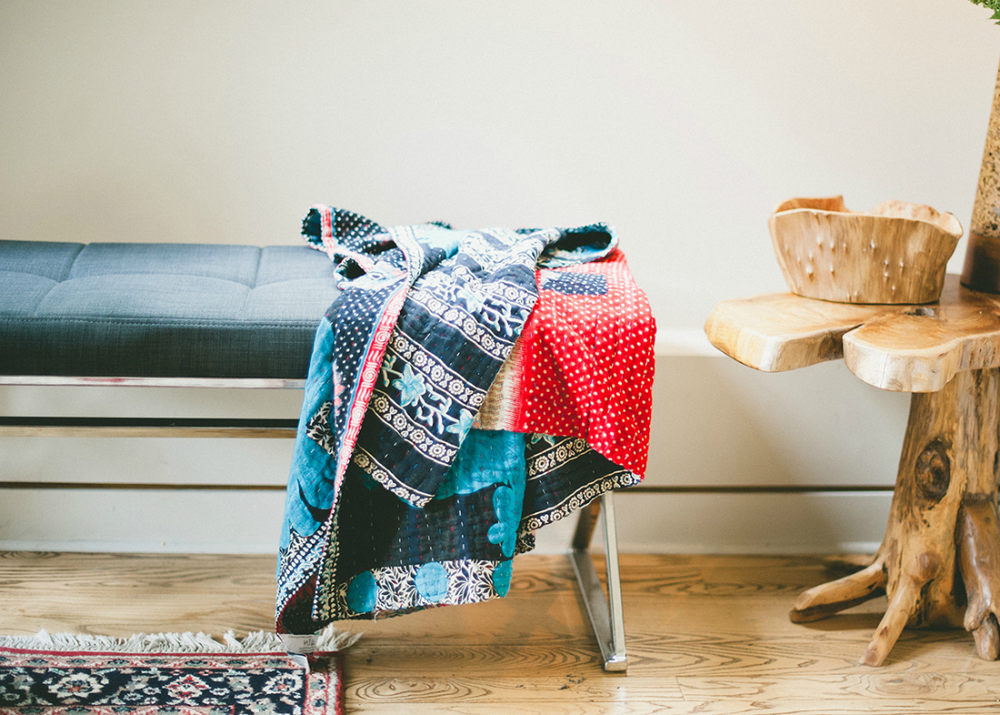 Where to Buy Kantha Quilts

Dignify sells fairly-traded Kantha quilts produced by at-risk women in Bangladesh: women who were previously homeless, doing sex work, or at risk of either or both. Each Kantha quilt is made of 6 layers of reclaimed sari cloth for durability. Dignify’s aim is to “promote dignity, empower humanity, and champion good.”