Ethical fashion has a racial representation problem. While we celebrate the women, predominantly women of color, who make our clothing once a year during Fashion Revolution – and maybe a couple more times around the Holidays – in almost all cases, we see white faces and white cultural expectations plastered across Instagram, in marketing campaigns, and in product photos. This dichotomy hurts people of color because it always establishes white people as saviors and people of color as mere beneficiaries of care.

The reality is far more complicated than that, which is why I reached out to several women in the ethical fashion space to ask difficult questions about representation. I’ll be sharing a couple more interviews later on, but today I’d like to introduce you to Tavie Meier. Tavie and I have known each other for a couple of years, having worked together on collaborations when she owned an ethical fashion brand, MadeFAIR. I encourage you to read this interview with openness and understanding, then voice your thoughts in the comments.

StyleWise: You’re a person of color working in an industry that is still fraught with a white savior complex. I think you’ve mentioned before that white people in this space are sometimes seemingly oblivious to the fact that your lived experience is not theirs. Can you elaborate on that dynamic and talk about the issues in the messaging and attitudes of the fair trade and ethical fashion movement?

Tavie Meier: I grew up in Littleton, Colorado and was often the token minority within my friend group. For example, I worked at a movie theater, and the staff dressed-up as James Bond characters for The World is Not Enough premiere. My manager assigned me Solitaire (Jane Seymour in yellow face). I’ve also been Princess Jasmine, Scary Spice, and as recently as last year, I was expected to be Missandei for a Game of Thrones party. (I wanted to be Margery Tyrell.) Costumes seem harmless, but it’s illustrative of how we perceive “the other.” I’m more white European than I am Chinese, Arab, or Black, yet I’m still considered “non-white” because of my skin color.

It’s like a dripping faucet: the drips, themselves, aren’t bad. They get more annoying as time goes on and soon you’re fixing your faucet with a sledgehammer.

It perpetuates the racial divide by showing predominately brown women as the benefactors of white women’s money. It’s a glamorized “White Man’s Burden,” believing – as a society – poor people require intervention and oversight. It strips them of their fundamental right to privacy.

Sure, sometimes US-based studios post photos of themselves for Fash Rev Week, but those instances are small businesses piggy-backing off Fash Rev’s marketing reach. If I’m purchasing a piece from a small studio, I already know who the designer is.

SW: Can you speak more to your point on Fashion Revolution? Is there a way to participate without causing further harm?

TM: I worked on Dorsu‘s Fash Rev campaign this year, knowing the co-founders, Hanna and Kunthear, wanted to avoid the racial divide we see in the #imadeyourclothes photos that would inundate Instagram that week. The idea of the “How to be an everyday advocate” was a sort-of sequel to Hanna’s past Fash Rev article on using the power you already have.  WhatFash Rev is missing is an actual call-to-action that will have measurable results beyond social media impressions, because the easiest way to get an Instagram like is to show your “generosity,” and in ethical fashion’s current climate, that is really just veiled racism.

SW: It is my theory that part of ethical fashion’s lack of inclusivity has to do not only with continuing white privilege, but with the fact that the fair trade movement as we think of it today was founded by white Evangelical Christians who, however inadvertently, adopted a colonialist mindset when working with artisans outside the US. This implicit/explicit framing attracts white people because we are less able to see the outlines of that problematic framework.

TM: Let me first acknowledge that I wouldn’t exist if not for Food for the Hungry, an Evangelical INGO that my dad worked for in 1980, when he met my mom in a Thai refugee camp for Khmer Rouge survivors.

Having said that, I have a well-documented dislike of charity for reasons that required a 2000-word guest post on the Note Passer.

I don’t think the act of charitable giving is bad – it’s charity structures that are cyclical and unproductive.

The reason I switched from charity to ethical fashion isn’t too different than a lot of ethical fashion founders who have rooted their mission in the New Testament. To be Christian means to be charitable, and, ultimately, they’re combining this fundamental aspect of who they are with capitalism – a cornerstone of the United States.

You know Christian-based brands because they use words like hope and peace in their names, and often quote Bible verses within a click of a landing page. Because charity imagery has historically been colonial (white spokesperson standing next to brown, malnourished person “in need”), some ethical brands may feel they need to use this to show their customers they, too, are “doing good” by making a purchase.

Using words like hope, peace, and [gag] redemption is even more problematic than colonial imagery. Many of these brands work with makers in majority Muslim, Hindu, and Buddhist countries and create an association between these countries (and their majority religions) with the absence of hope and peace, in need of “redemption” by way of making purses “designed in Texas (or wherever).” I’ve seen some that make mention they work with Christian organizations, which then makes me wonder if they feel non-Christian or secular organizations are unworthy hope, peace, and redemption, which isn’t very Christian.

SW: Some brands say that they “have to use” conventionally attractive, white women for their marketing for things to sell. Do you think this is a legitimate claim? I know that in blogging, for instance, there is some truth to the idea that you’ll be more successful if you fit certain stereotypes of attractiveness and behavior.

TM: There’s a marketing principle about how we buy things from people who look like us. It might give this claim some legitimacy, but that’s about as much credit as I’m willing to give it.

Saying they “have to use conventionally attractive, white women” means one of two things:

When ethical brands say they have to use conventionally attractive, white women, I assume they don’t know what they’re doing. They’re trying to emulate images of beauty they see in media, which indicates the types of media they choose to consume. If you’re only following white bloggers and reading news written by white journalists, then of course you’ll believe you need conventionally attractive, white women to sell products.

SW: I’ve been writing on ethical fashion for over 5 years now and in some ways I’m more discouraged than ever. It seems like the urge to sell-sell-sell has made people cut corners and lose some of the initial thoughtfulness I came here for. What do you think consumers should be paying attention to in order to cut through the marketing BS?

TM: The problem is brands sell what they believe people need or want, and therefore justify their unsavory methods by convincing themselves they’re solving a problem or turn a blind eye for the sake of “financial autonomy for the most oppressed people in the world.” Therefore, they’re acting in such a way they believe is in the best interests of their businesses. In fact, I bet some people would agree with everything I’ve said here and remain blissfully unaware they’re doing anything wrong.

As a consumer, I do a “selfie test.” I’ll go to a brand’s Instagram account and look for a couple of things:

If I notice just one of these happening, then I take my money elsewhere.

I’d also like to make mention that minorities have always felt discouraged by all fashion because of cultural appropriation, sizing, or representation. There’s an equilibrium in ethical fashion, where middleclass (mostly white) women enter it as idealists then feel discouraged. On the other end of the spectrum, women of color enter it already cynical, but with the urge to make it better. For the idealists, being retweeted once will feel like failure, whereas the cynics will view one retweet as one human being listening and identifying to what they have to say.

SW: More and more, I think this movement has to become intersectional. Do you have any suggestions for how to incorporate broader social justice issues into the way we talk about and market ethical fashion?

TM: The best way to do it is to just….do it. As part of an elaborate research project for MadeFAIR (which I haven’t finished yet), I studied audience engagement of five major, ethical fashion brands to see how breaking news affects their Facebook posts. So far (this is ongoing), I found that across the board, audience engagement decreased by an average of 30% after Reuters reported on the GOP’s family separation policy. There was one exception: Eileen Fisher. The reason why theirs increased is because of this post: 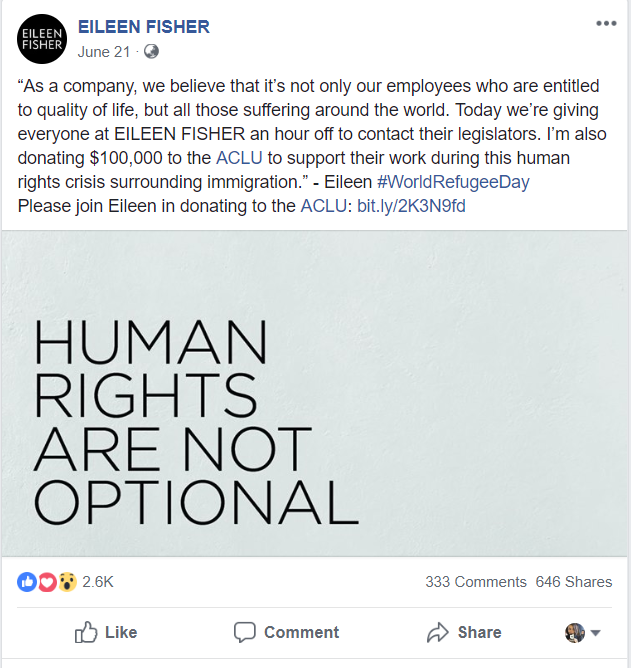 There’s a chance they promoted this post, but then I went to Instagram and discovered the same announcement received about 5x the number of likes and comments as the posts before and after.

Now, Eileen Fisher received mixed reactions – some people were stoked about this, others were angry their favorite brand used their platform to take a political stance. As a shrewd marketer, I see a brand taking a massive marketing risk that will end up translating to increased sales because, as a consumer, I see “my money” (their profits) donated to a cause I like.

SW: You’ve been working in this industry for years, both as a business owner and marketer. Have you seen any progress in inclusion? Do you think certain components of the niche actually deter that progress?

TM: I see progress in established brands who, over time, have realized the importance of inclusion.

For example, Mata Traders has not only the most options for extended sizing but also a racially diverse group of models on their website. Tonle also has one of the most lifestyle-inclusive Instagram accounts (I’m 100% here for tattoos and pink hair), and it’s impossible to ignore Everlane actively embracing androgyny and showcasing bloggers from all walks of life – their website taught me the word “gamine.” Even Reformation – the poster child for coolness and leggy models – has started including plus-size women in their social media imagery. Lastly, I’d be remiss not to mention Soko, the first brand (that I noticed, anyway) whose models have always been representative of their jewelry’s cultural roots.

These are all hugely successful, US-based brands who embrace diversity rather than seeing it as a detriment to sales.

However, many new brands seem oblivious to these examples, and that lacking awareness and research is ethical fashion’s biggest hindrance.

Maybe they’re using their friends to save money (big mistake – professional models are professional for a reason), or perhaps they’ve never had to consider how awful it feels to buy your brown child a white Barbie. I doubt they’ve consciously ignored the void of representation, but pair their ignorance and that desire to “do good” with the US’ systematic racism, and what we see is the internalized correlation of brown people with poverty, and white people with wealth and beauty.

Photos by Demetrius Washington on Unsplash

View from bed this morning. Today was the first da

Today things feel hard. The good news is that my p

Just a PSA to let you know that several #everlaned