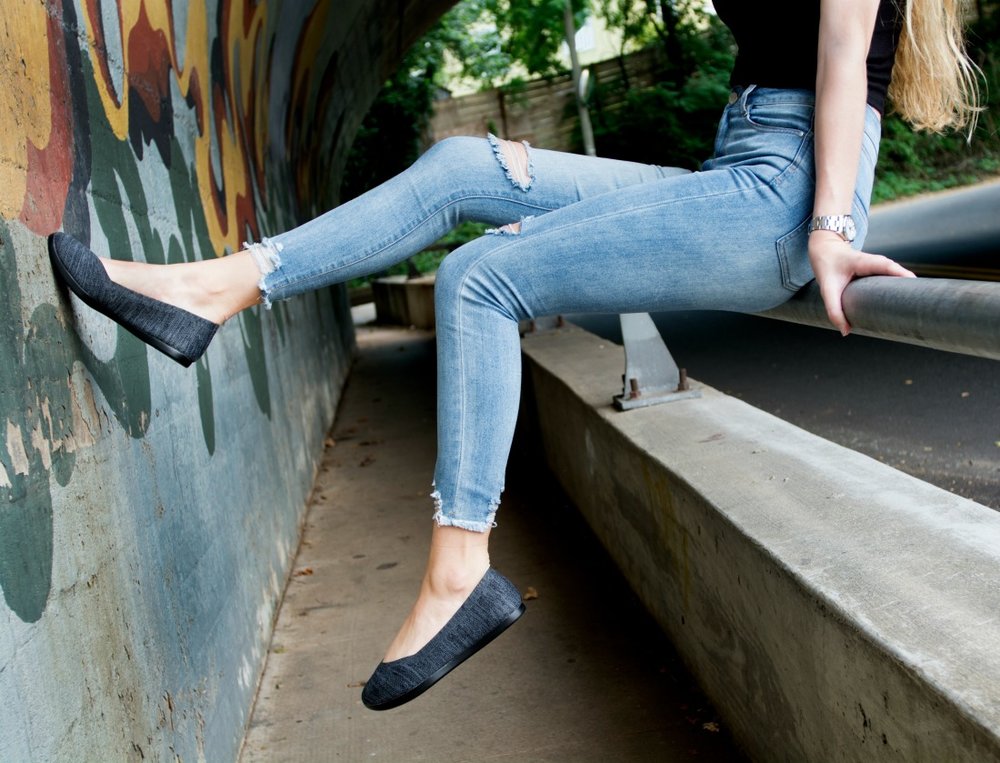 A quick disclaimer: This is an opinion piece. I’m not a lawyer. My analysis of legal documents was done independently and some analysis may be incomplete. Photos courtesy of OESH.

When I learned that exceedingly popular “eco” shoe company, Rothy’s, was suing OESH, a local company known for their orthopedic, 3-D printed shoes, I quickly became engrossed in the drama.

Why? I’ve worked with OESH in the past and even visited their local factory, and I receive targeted ads for Rothy’s so often that I’ve basically memorized their product offering. Even though they’re operating in a similar space – footwear, some eco-friendly and “techy” production practices – I never expected them to become involved in a battle over ballet flats, mostly because their marketing and target demographics are so obviously differentiated: OESH appeals to middle-aged and older women with a history of foot problems and Rothy’s tends to target a younger, city-dwelling market enamored with their green marketing (Rothy’s touts recycled plastic uppers).

The claims and counterclaims of the case are a matter of public record, and so it was easy enough to trace down the documents and read the accusations.

Charlottesville company, OESH, developed by Dr. Casey Kerrigan, formerly a professor at UVa, manufactures shoes for women based around Kerrigan’s decades-long research on women’s gait. As it turns out, most shoe lasts used across the industry were developed based on a man’s foot and way of walking, which is affected by pelvic proportions and alignment with the legs. OESH shoes incorporate a flat, springy footbed – some are 3D-printed in Charlottesville and others molded at an ethical factory in China – and a wide toe box to decrease the risk of creating or exacerbating a variety of foot problems.

Last summer, OESH launched an Indiegogo campaign for a new product called the Dream Flat, an everyday flat that incorporated OESH’s key foot health features and a stretchy knit upper using technology first introduced by sneaker brands like Nike around 2012. The campaign managed to raise nearly $100,000 before it was abruptly shut down by a flat company known for their “washable, woven flats and shoes made with recycled plastic.”

In Rothy’s initial lawsuit, they claim that OESH is intentionally misleading customers in a similar niche and violating their patents by making a flat that both resembles Rothy’s original design with a rounded toe and pointed vamp and incorporates recycled plastic knit uppers (OESH is not, at this time, using recycled plastic in their uppers). The document is extensive, but the most compelling claim is that an employee of OESH actually shipped a pair of Rothy’s to OESH’s corporate office last spring. I’m not a lawyer, but if this were to go to court, I could see that argument being the sticking point.

That being said, the remainder of the document does more to illuminate the weirdness of patent law than anything else. Rothy’s lawyers incorporate several side-by-side photographs and illustrations to provide evidence that OESH violated their patents, but it’s as clear as day to me that they intentionally chose angles that made the competing flats look more similar than they appear in real life. I’ve seen both OESH’s dream flats and Rothy’s classic flats in person, and it’s nearly impossible to confuse them, mostly because the OESH flats have a noticeably wide toe box, which is evident when you’re looking down at someone’s feet.

The Counter Claims, aka Sick Burns

If it’s not already clear, I am not an impartial judge. I side with OESH here, and I found their counter claims compelling. The gist of it is this: not only did OESH not copy Rothy’s, it may be the case that Rothy’s copied several other shoe companies, including an artisan, crochet footwear brand based in Los Angeles and one-for-one shoe giant, TOMS (Jutti flats anyone?), while developing their initial design.

According to the counter claim (page 27), co-founder Roth Martin stated in an interview with the San Fransico Chronicle that:

“TOMS were everywhere, and it inspired us to create a product…”

OESH also claims that Rothy’s changed elements of their original patent illustrations to make them appear more similar to the OESH Dream Flats after they had already filed their initial lawsuit against OESH. Against patent policy, they allegedly made these changes without notifying the patent office of the ongoing legal battle.

What’s more, their implied ownership of knitwear technology in shoes is simply not justifiable, as it’s well known that Nike was the first-to-market with knitted uppers. Furthermore, the claim that Rothy’s should be the sole maker of knitted uppers that incorporate recycled plastic is not only impossible to legally enforce but – and this is just me talking – harmful to furthering the ethical fashion industry’s sustainability goals. Why would a purportedly ethical company want to make it harder for other companies to use eco-friendly materials?

Going After the Little Guys

When it comes to patent and intellectual property law, especially in fashion, things get murky really fast. For one, just because someone is the first to patent a product doesn’t mean they were the first to invent it.

Take the recent case of Ipik Urgit’s (of swimwear brand Kiini) blatant theft of a Brazilian designer’s crocheted bikinis. Patents are expensive, complex, and time consuming, and therefore always favor those with the social and monetary resources to undertake them. And they’re no good unless you enforce them, so throw in a few thousand more dollars to deal with your competitors.

But it’s not economical to go after just any competitor. You wouldn’t file a lawsuit against a giant like Nike, or even TOMS, who have the money and legal staff to drag on a lawsuit indefinitely. You would go after the little guys, who might buckle after a simple cease-and-desist letter or settle very quickly (A quick note here: cease-and-desists are not public and so claiming that Rothy’s has gone after other brands is merely speculative, but it does appear that other knitted-upper loafer and flat brands with crowdfunding campaigns have quietly and without explanation ceased production after successful fundraisers, and it wouldn’t be unreasonable to think Rothy’s had something to do with it).

The Ethics of Investors

You may be thinking, “But I thought Rothy’s was a startup? How can you claim they’re not little guys?” As it turns out, Rothy’s just accepted $35 million in funding from Goldman Sachs after doing around $145 million in revenue in 2018.

Yes, lots of growing, ethically-branded companies have taken on investors (Everlane raised $18 million from various investors by May 2017 – this list provides data on other popular brands like All Birds and StitchFix). But Goldman Sachs are a straightforwardly unethical choice since even they admitted being partially responsible for 2007’s housing market collapse, which devastated American families, doubled unemployment, and contributed to a 22% decline in household net worth by 2009.

And what will Rothy’s do with 35 million dollars? A small portion of that money may contribute to continued legal fees and (perhaps) investment in research and development, but unless they’re about to “disrupt” the industry, it’s hard to see how this was the right way forward.

(I will be doing more research on the the other capital firms for a forthcoming post, but that’s a topic for another day.)

Suing for a Marketing Angle

What it comes down to, and again, this is just my analysis, is that Rothy’s is fiercely protecting their right to a marketing angle.

They want to be the only maker of eco-branded flats and they’re willing to entrench smaller competitors in endless lawsuits, threaten start-ups out of business, and take on clearly unethical investors to maintain their place.

And sure, the Capitalists and intellectual property lawyers reading this may think, “that’s their right.” But what does it say about them that they’re perfectly okay with withholding ubiquitous and potentially sustainable technologies – like knitting machines that use recycled plastic – from the rest of the industry in the name of market share?

The knock-off and counterfeit industries are exploitative and unfair. But that’s not what’s being debated here, in the end. Because Rothy’s doesn’t need to sue competitors in order to maintain their market share. They have 35 million dollars to inject into advertising and development.

It’s not just about Rothy’s. The case of Rothy’s vs. OESH is the canary in the coalmine of things to come, and of cases hidden from the public. As “ethical” and “sustainable” buzzwords continue to be touted as effective marketing angles to get idealistic millennials and Gen-Z’ers to fork over our hard-earned cash, we should expect more companies to absorb the feel-good marketing without buying into holistic ethical values. As long as we allow the free market to “regulate itself,” as long as we hold the wealthy and the “industrious” and the bootstrappers as our cultural idols, we will continue to allow brands to take advantage of us.

And in a way, I think we want it that way. It’s much easier to let the marketing team at a place like Rothy’s tell us we’re good than admit we live in a complex, amoral society that requires more than our purchasing power to make a positive impact, and more than our blind faith that companies are telling the truth.

I wish I could solve the problem of brand dishonesty so that consumers don’t have to spend endless hours poring over legal documents and typing out precise Google searches, but I’ve been at this for six years and I haven’t found a solution yet. I believe in the power of certifications and in building as many personal relationships as possible in this industry so that we can really know and trust one another. That’s all I’ve got for now. 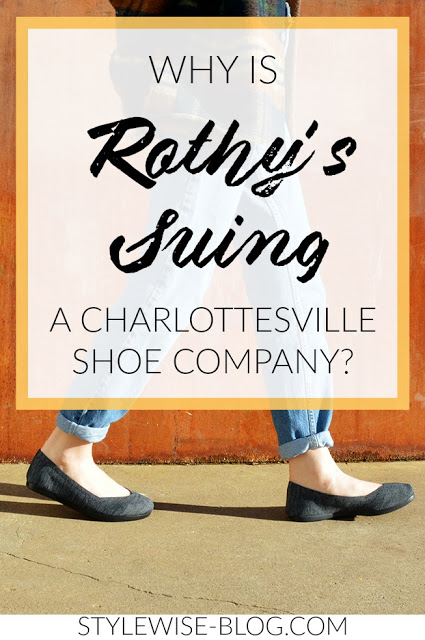