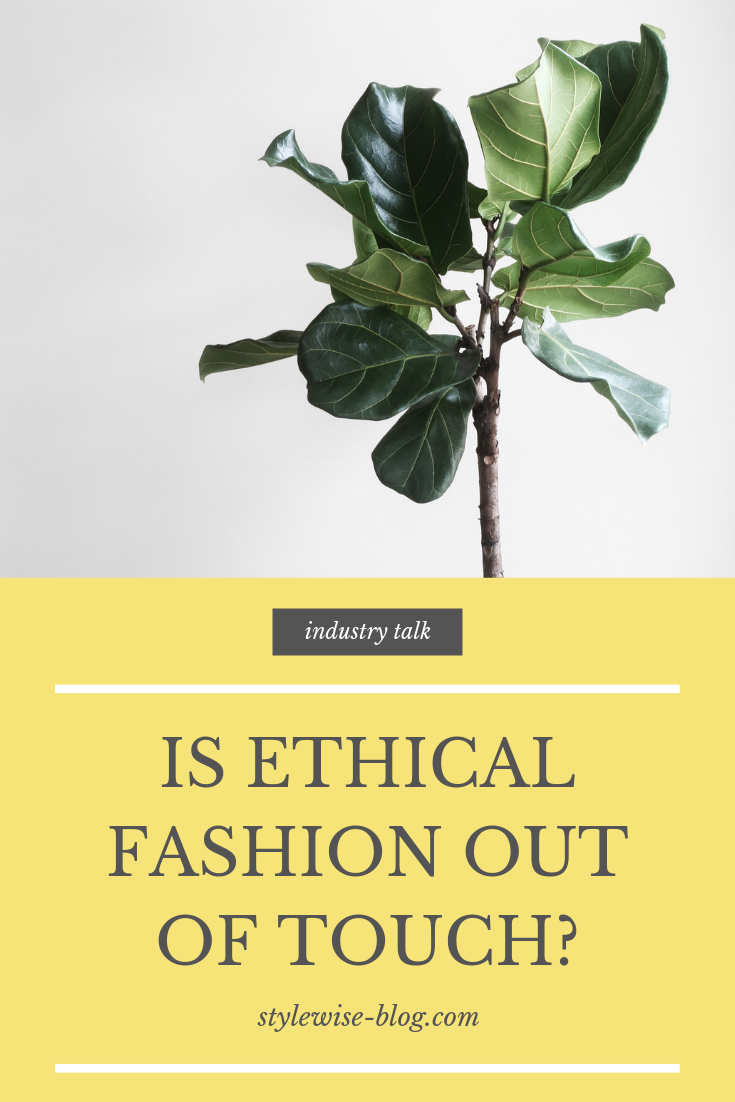 Last week, Andrea of Seasons + Salt expressed a frustration that ethical fashion is too insular:

I feel the ethical fashion community has become stringent, expensive and redundant, and I don’t love that. Even worse, it has started to feel exclusive.

She’s not the first person to have stated something to this effect over the years, but she is perhaps the “biggest name” to have done so recently and one of the only influencers to have expressed it in such strong terms, so I applaud her for speaking up.

And I don’t disagree with her entirely.

If you were to create a list of the “Top 10 #ethicalfashion Instagrammers” by social media following alone, you would very clearly see a combination of $400 pants, linen box tops, and neutrals worn in white-washed spaces with a carefully-placed plant in the background.

This is, by nature of its extraordinarily narrow focus, bound to feel insular, and the price points are definitely out of reach not only for the “conventional” consumer who hasn’t yet discovered ethical fashion but even for people who have already bought into our sustainability narratives.

But let’s be honest: part of the reason this aesthetic has become so pronounced is because people like it, and because – from an influencer or brand perspective – it sells.

So in a way, it’s not a dream world being manufactured from the top, it’s something thousands of people have indicated over and over again that they want through likes and follows, and maybe most importantly, sales. The ethical Instagram aesthetic, in turn, grows because influencers rebrand or join the ranks to piggy-back on an extraordinarily successful marketing angle, and before you know it, we’ve got a runaway train on our hands.

So these influencers of the white walls and gently wrinkled linen, however inadvertently, begin to crowd out the eccentrics, the upcyclers, the secondhand shoppers, and the less glamorous “industry experts” (did you know some people in this niche actually know stuff? Gasp!) and it begins to feel like “the rest of us” maybe never existed.

If you think ethical fashion is insular, maybe it’s because you’re in the room with the wrong people. And I’m not saying you did it on purpose or that you were “tricked,” but, from where I’m standing, ethical fashion is a space full of maximalists and penny pinchers and DIYers, of techies and systems thinkers and collaborators.

And maybe I’m biased, because I’ve never been asked to join the clique. But we’ve got to get better – as a far-reaching community – of seeing the data and not just the anecdote that proves our point.

Last fall, author Elizabeth Cline and influencer Benita Robledo offered me and others a chance to share a #glamcapsule in tandem with the seasonal 10×10 challenge. Cline, a lover of vintage, and Benita, an avid thrifter and someone who likes to lean into her Latinx sartorial heritage, saw this gap in the visual space of Instagram – this potential insularity – and wanted to help people in the ethical fashion community embrace wackiness, color, pattern mixing, and individuality in the way that they dress.

British blogger, Tolmeia, of Tolly Dolly Posh also proves that ethical fashion can be exactly what you need it to be, even if that means a mix of thrifted, vintage, and ethical finds. I’ve been following her since she was about 16 and she even designed the logo I used on StyleWise through most of last year (and the bee in my current header).

But how can we choose to engage with people who defy the insularity of the dominant visuals?

I didn’t “meet” Benita or Tolmeia on Instagram. I met them in networks and twitter chats. I already knew of Cline because of her popular book, Overdressed: The Shockingly High Cost of Cheap Fashion, but made a connection with her on Instagram later on. The point being that there are lots of ways to connect to people besides following hashtags on Instagram and, in fact, building meaningful relationships and appreciating greater diversity in this space will eventually require taking the conversation off of Instagram.

Some of these resources are specifically for bloggers, but many of them are open to anyone who considers themself an advocate.

There are a number of ethical and eco-fashion groups you can join on Facebook. I would suggest going to facebook.com/groups to see suggestions or use the search bar to look for “ethical,” “sustainable,” and “ecofriendly” groups. A few I’m in or recommend:

My top recommendation is Ethical Hour, which takes place every Monday. I met Tolmeia through twitter.

I met some of my good blogger friends through networks that now no longer exist, at least not in any effective form. While networks are inherently messier than superficial Instagram relationships, they provide a way to have long term, multi-dimensional, non-performative conversations with people, and learn in the context of safe, relatively private spaces.

In fact, I’m working with Linnea of Darling Boutique, Lorraine of the Spirit of 608 podcast, and Sallie at the local Ten Thousand Villages to put on a screening of The True Cost this Thursday. If you’re local, you can learn more and grab a ticket here: 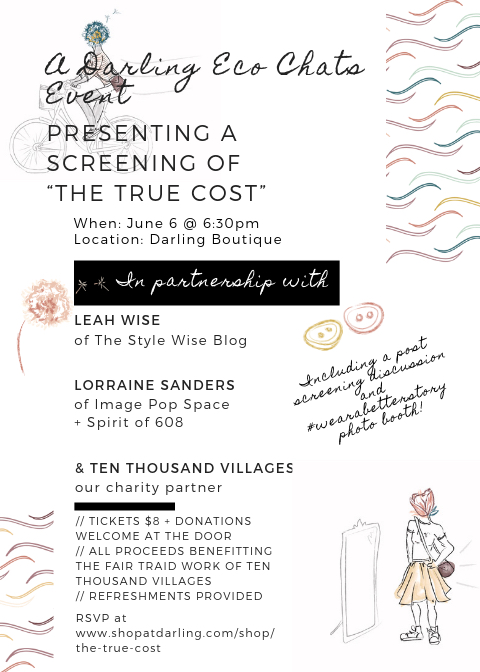 I also learned a great deal by attending the DC Sustainable Fashion Collective’s event last fall. Industry professionals, nonprofit certifiers, academics, textiles recyclers, fashion industry insiders, writers, and influencers met together to learn from one another, and it reminded me that, 1. we need experts working at larger scales than the consumer level and, 2. the marketing/influencing side is a VERY small part of the industry overall.

If you’re close to a city or university system that offers conferences and lectures on anything related to this industry, you should definitely go!

As I’m rebuilding my Instagram account, I am intentionally seeking out people who defy the stereotypes of this niche and holding off on following too many accounts that look the same. I’m choosing to follow:

If you can find them, there are great blogs out there who cover sustainable fashion in less stereotypical ways. I recommend:

And, if you’re looking for ethical style that fits your point of view, check out my:

At the end of the day, no matter where we’re situated in the conversation, we can all do our part to make our voices heard, and that includes our aesthetic point-of-view and financial situation, as well. There are hundreds of thousands of people using their purchasing power, votes, brains, and hands to make the world better for people working in and around the garment manufacturing industry, and they’re here even when we don’t see them.

Ethical fashion isn’t insular. The doors are wide open. Take a step out of the white-washed room and see for yourself.

P.S. Sustainability journalist Whitney Bauck published a related piece on Fashionista that delves into this question from a different angle. One thing she implicitly points out is that often we think that people have “left” ethical fashion when, in reality, they’ve decided to pursue it from a more structural or policy-driven level. Abandoning the consumer advocacy side should not be conflated with abandoning the movement.