I’ve had a very weird relationship with my closet recently.

I mean, I could probably say this every winter. The doldrum days of consistent cold lend a kind of bland uniformity to getting dressed.

But things have broken down even further by nature of the fact that I sprained my ankle on the second day of classes (about 3 weeks ago) and every move I make is now informed by how to avoid putting weight on my left foot. 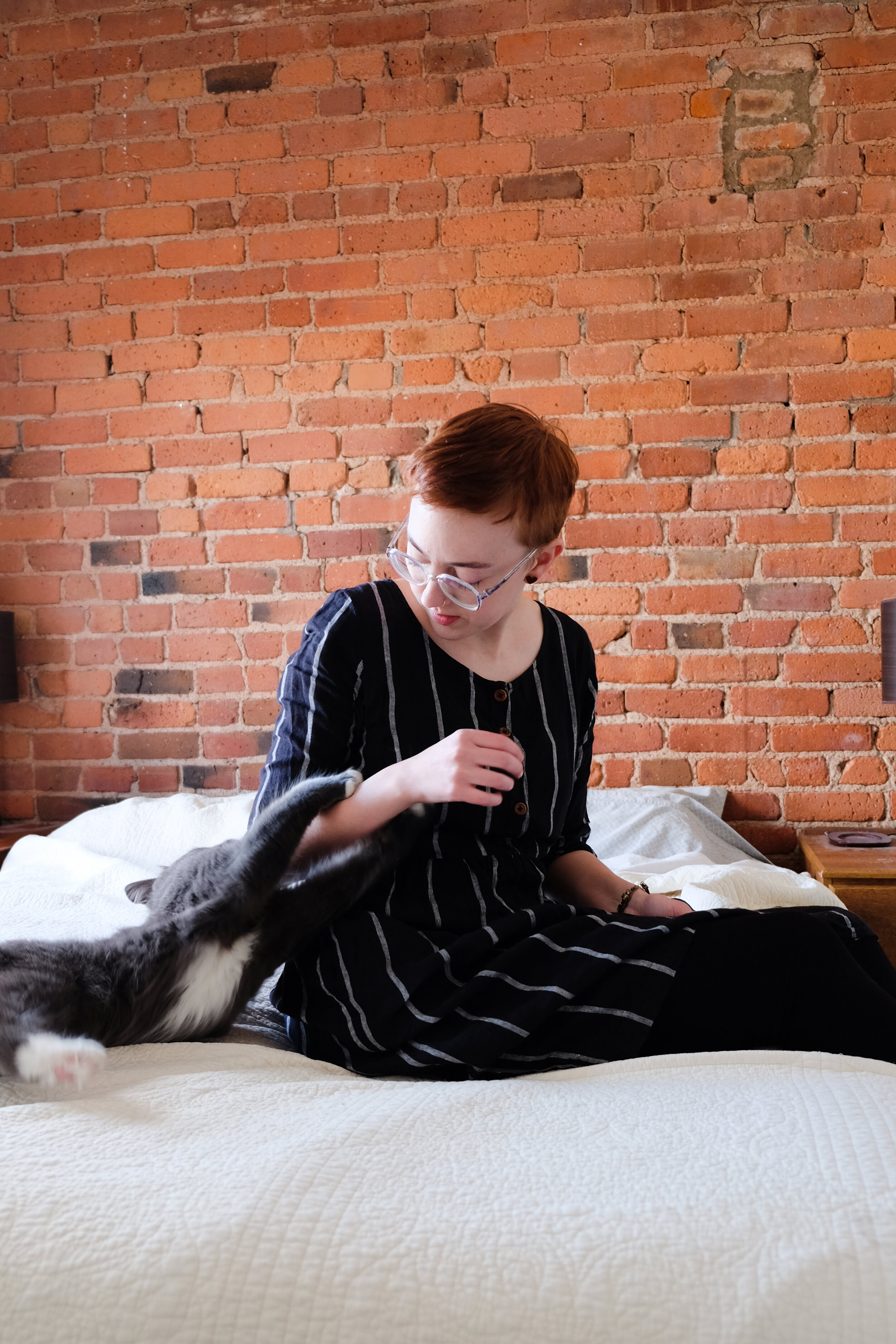 Right before the semester began, I went thrift shopping with my friend and purchased a couple of dresses to layer over long sleeve tops and sweaters. I was determined to have a little more fun with my wardrobe as a mechanism for dealing with the stress of school and the SAD-inducing dark days. I was also going to walk to school more to build up some endorphins and experience the crisp air.

Instead, I am mostly home-bound, afraid to wear long dresses while walking around with crutches, because it feels like an additional trip hazard.

Health issues in our household paired with community trauma at seminary resulted in a period of depression, to the point that I was crying every day, until suddenly, I just kind of snapped out of it last week (I’m sure this was actually due to a combination of factors, but it felt like night and day).

One bright spot was that a woman on the Pyne & Smith Clothiers BST group offered this dress up for trade, which was perfect because I had a dress that wasn’t quite suiting me and this is the exact dress I was interested in replacing it with.

Receiving it in the mail and then taking some photos in it with my cat, Sebastian (who is really into blog photos, apparently), was a real bright spot during weeks of relentless downers. That was good, but it also made me realize how much I rely on consistent consumption to raise my spirits.

It’s also been interesting to not be able to make use of the shoes in my wardrobe, since only my Allbirds fit over the wrap on my sprained ankle. When my options are forcibly reduced, I become a little stir-crazy for novelty.

What this whole thing has taught me (besides the fact that I am very bad at accepting the help of others, sigh) is that 1. I can very well get by with the basics when it comes to winter clothing, 2. I really like having the agency to mix things up, and 3. I still have an unhealthy relationship with consumption.

I don’t have solutions to offer up at this point, only a realization that it doesn’t take much to change your orientation toward your body, your community, and your things.

Speaking of community, a reader recently asked if I would share more about Sebastian. We got Sebastian from the local shelter (which was a much better option than choosing the comparatively uppity and more expensive cat rescues in town).

He has opened up a lot since we got him. While he doesn’t meow much, he makes adorable little “hmm” sounds when he’s curious or engaged in play. He isn’t a lap cat or a cuddler, but he stands very regally on Daniel’s lap when he wants attention and spends most of the night sleeping on the bed with us. He won’t let me pet him (yet), but he will enthusiastically lick me. He has also woken me up twice from nightmares, so I see him as a bit of a magic cat.

‣ Become a Patron
‣ Buy Me a Coffee