What does the Bible say about caring for the Earth?

In Whitney Bauck’s recent interview with Bill McKibben, the Christian environmentalist and climate-change activist provides compelling reasons for understanding climate change as a human rights issue. This framing aligns quite well with Judeo-Christian teachings around caring for the poor and needy, as shown in the Bible passages below:

Religion that is pure and undefiled before God, the Father, is this: to care for orphans and widows in their distress, and to keep oneself unstained by the world. – James 1:27

You shall not oppress a resident alien; you know the heart of an alien, for you were aliens in the land of Egypt. – Exodus 23:9

It also reiterates the pre-existing outreach efforts of many modern churches, who often participate in community feeding programs, offer sanctuary to undocumented immigrants, and run nonprofits for refugees, single mothers, and other marginalized communities.

I agree with McKibben that the best way to convince church communities to care about climate change – and all the environmental concerns it encompasses – is to frame it in terms of the human community, and to place the long work of progress within a human-centric Kingdom of God narrative that faithfully works toward a transformed world:

But, in accordance with his promise, we wait for new heavens and a new earth, where righteousness is at home. – 2 Peter 3:13

But the reason that American churches in particular are best equipped to hear a human rights argument is not simply because our faith compels us to serve others.

In some ways, it’s actually because we have, for too long, relied on a misreading of the Judeo-Christian origin story. We have bought a narrative of Empire, in which some humans – primarily those we can “evangelize” or influence to our way of life – matter more than those who reject our teachings, even if this is largely implicit in our language. So, while “mission-mindedness” is one of the contemporary church’s primary goals, the history of these outreach programs reminds us that mission has almost always been tied up in evangelizing. It’s conditional, and often manifests in programs that offer services only if the individual being evangelized is willing to engage in religious services and other practices. Some people reap the rewards, others are left out.

This has impacted the way we read the Bible, because it creates a hierarchy: “chosen people” or “believers” at the top, “the lost” in the middle, and then all the rest of creation. For some reason we’ve gotten it into our heads that God has actually created this hierarchy and that it means that God actually cares less about some of God’s creation than others. It also implies that being righteous is all about what humans do to prove themselves (which is, according to orthodox theological belief, heretical).

This, in turn, has helped us buy into a narrative that all of God’s creation is subject to us, built for our use and abuse without consequence.

(Even though the “us” in this essay primarily refers to practicing Christians, Christianity’s ideological impact on the Western world is so profound that a lot of these frameworks apply to all of Western culture, not just Christians).

Did you know that there are actually two Creation stories?

Genesis 1:1 through 2:4 tells one cohesive story, beginning with those famous words: “In the beginning, God created the heavens and the earth…”

Genesis 2:5 through 2:25 tells a second story, one in which God is portrayed as anthropomorphized and grounded, in a literal sense, conversing with Adam first and then with both Adam and Eve in the setting of the Garden of Eden.

In the first creation story, which tends to get a lot more airtime, God creates the components of earth methodically, starting with light and dark, then the sky, land and sea, then the creatures of the sea, sky, and land, and so on. Christian theologians have often interpreted this as a hierarchy, in tandem with later verses that are often translated as “fill the earth and subdue it.” Therefore, humans – created on the final day of creation before God rested – are thought to be superior to the earth in which they inhabit.

The word translated here as subdue, however, can also be translated as “occupy,” which yields a very different meaning. And, taken with the second creation story, occupy offers a more consistent reading.

In the second creation story, the earth already exists, sustained by a mist that waters it. When God begins to create, God actually creates “human” first by breathing into their nostrils (the word used here, which is masculine, is transliterated adam, and is a play on words with the name of earth, adamah, the feminine form, or mother earth). God plants a lush garden for them to dwell in and “the man” or “the human” participates in the careful naming of each animal as God creates them, searching for a companion for the lonely human:

And man named all the cattle and the fowl of the heavens and all the beasts of the field, but for man, he did not find a helpmate opposite him. – Genesis 2:20

So God decides to make a companion that literally shares DNA with Adam, and thus the first family is created, from breath of God, from adamah/earth, and from one another.

Before the serpent convinces Adam and Eve to eat from the Tree of Good and Evil Knowledge (my Old Testament professor told us that there’s some evidence to suggest that the term, “good and evil” is an indicator of wholeness, meaning that this verse could be translated “Tree of all Knowledge”), the garden is green and thriving, and Adam and Eve are literally made from one body – talk about unity – and blissfully naive (“they were not ashamed” of their nakedness).

We can speculate here about why it’s important to the Old Testament writers – or should be important to contemporary practitioners – to avoid a couple of trees, but I’m skipping that for now because the good part is finally coming.

Toil, pain, and degradation are a part of punishment, not paradise.

Maybe the writer is making a theological point that being a know-it-all, or even a person with the wisdom of age, is an exercise in acknowledging pain and not being able to do much about it. But in any case, this is what follows:

To the woman he said,
“I will greatly increase your pangs in childbearing;
in pain you shall bring forth children,
yet your desire shall be for your husband,
and he shall rule over you.”
And to the man he said,
“Because you have listened to the voice of your wife,
and have eaten of the tree
about which I commanded you,
‘You shall not eat of it,’
cursed is the ground because of you;
in toil you shall eat of it all the days of your life;
thorns and thistles it shall bring forth for you;
and you shall eat the plants of the field.
By the sweat of your face
you shall eat bread
until you return to the ground,
for out of it you were taken;
you are dust,
and to dust you shall return.”

Suffering is a result of the fall, not of creation itself. Pain and patriarchy, famine and turmoil aren’t fit for Eden.

Christians, and particularly Christians who have historically enjoyed friendship with Empire – from Constantine to the USA – have been operating under the assumption that dominion in all its forms can be upheld in the name of Jesus, or if not Jesus explicitly, the longer, larger Biblical narrative. We have done so not because we meant to, but because millennia’s worth of beloved teachers and preachers have woven this assumption into their writings, and it has made its way into our Bible translations, liturgies, and Sunday School classrooms.

But the earliest and best story of God’s interaction with creation creates a compelling case for seeing our current plight as the sin that it is – the kind that just so happens to align with greed – and not as inevitability.

Let me just go all out here and say it: environmental degradation in any form, but especially the kind that has led to swift and, arguably, irreversible climate change is sin.

We as descendants of Adam and Eve, whose parents are Mother Earth, Breath of God, and each other, deny our creatureliness, ignore God’s abundant care, and sacrifice each other when we deny the need to care for God’s creation. 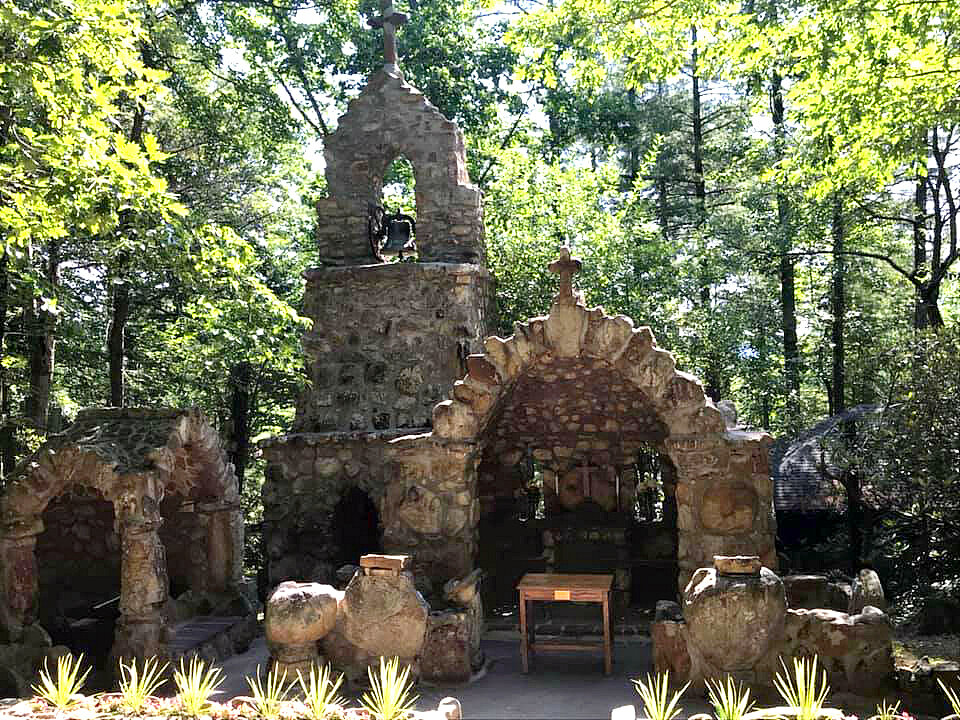 The Episcopal Diocese of Virginia’s official cathedral is this beautiful outdoor shrine, The Cathedral Shrine of the Transfiguration , at an outdoor retreat and summer camp center called Shrine Mont in Orkney Springs, VA (my favorite place in the world).

But Christians, it has been said, are Kingdom people.

That means that our theology leads us, eventually, to the hope of future paradise. Through Christ and his Body – the church – we are confronted with the call to transform the world as we know it:

As you go, proclaim the good news, ‘The kingdom of heaven has come near.’ Cure the sick, raise the dead, cleanse the lepers, cast out demons. You received without payment; give without payment.

What would this look like if we understood this in our bodies (as embodied)? To build a new heaven and a new earth would mean something different than hoping to get to Heaven. It would mean we are enactors, builders, creators, artists, and activists, not plundering the world in search of an Eden we were long cast out of, but active people building communities that ache with hope in spite of the desert we find ourselves wandering within.

Remembering what the Psalmist said:

The heavens are yours, the earth also is yours;
the world and all that is in it—you have founded them. – Psalms 89:11

We have a chance, right now, to let go.

To let go of the false claim that we own any of this, that the world merely exists for our exploitation, that this is how things were supposed to go, that nothing can change that.

“The earth” is not Other. The earth is us, too. We are of earth, made with and for it, and part of a complex ecosystem intended to remind us of miracle in its second-by-second, astounding functioning.

If nothing else, consider this: Adam named each animal and you don’t name something you don’t intend to care for.

*I used the NRSV translation when quoting verses and relied on the Chabad side-by-side English and Hebrew text for translation assistance.