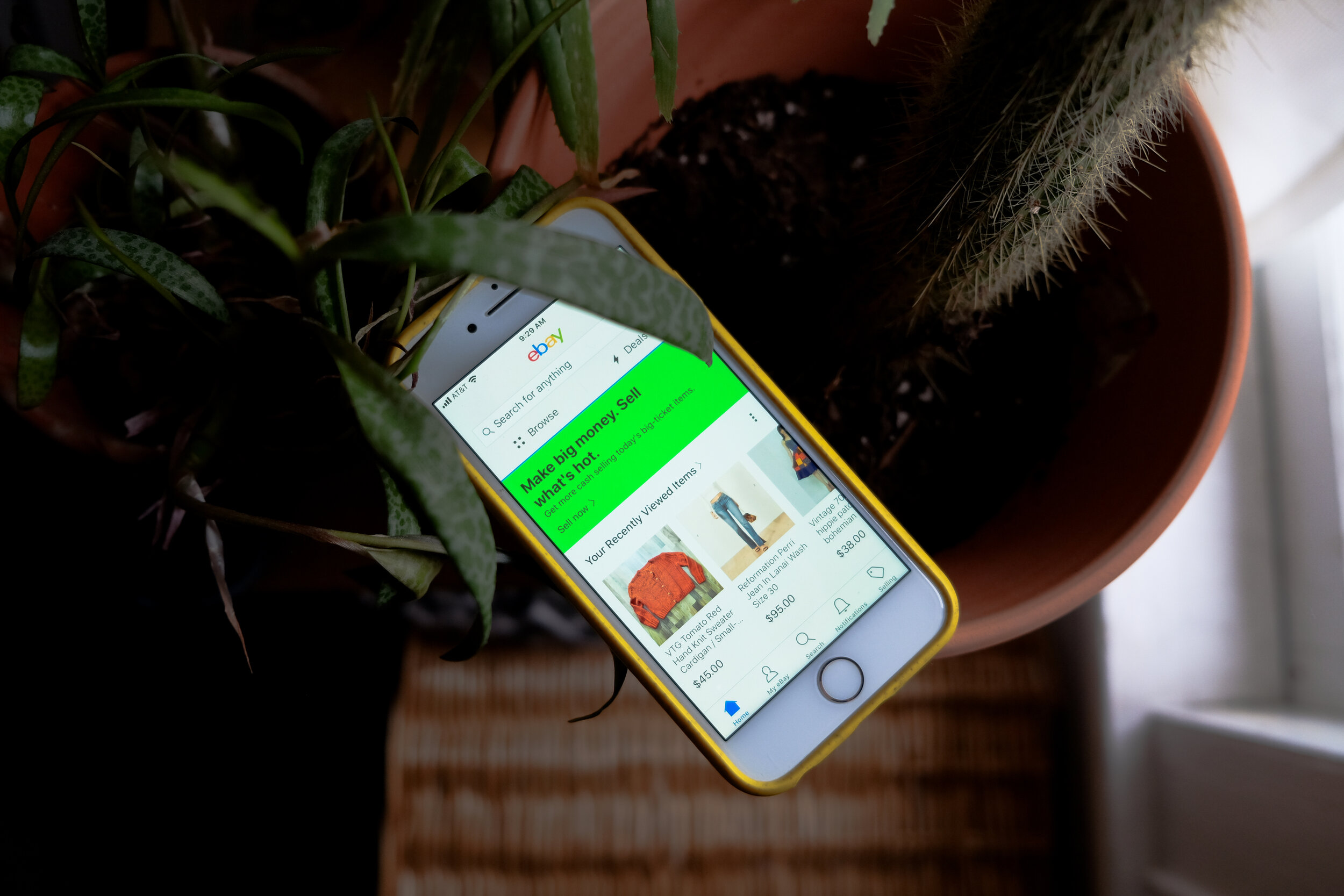 I sincerely wish I was being paid to write this, but alas! It does contain some affiliate links.

Why Ebay is My Favorite Online Thrift Store

In 1995, Ebay revolutionized the way we use the internet by creating the first online auction site.

I was approaching seven years old in 1995, and I’m pretty sure I didn’t know what the internet was, though I did enjoy a handful of computer games, including one my sister and I still sing the jingle to. It wasn’t until 2003 – when the “That’s on Ebay” commercial was first released – that Ebay began to permeate the public consciousness in a big way.

As a kid who had literally dreamed about a future in which I could choose my outfits from a screen and have them “magically” appear in my room, online shopping was a revelation, and Ebay was at the forefront of my formation.

Ebay has had to contend with competitors over the last few years, first Etsy and now a half a dozen or more online swap and secondhand sites that have been much savvier about marketing to a particular millennial, sustainability-minded bargain shopper.

Sites like Poshmark and Depop, for instance, began as apps that allow people to search and shop from their phones. Thredup has heavily leaned on the idea that they’re an online “thrift shop,” and all of these new kids in the space act as if they have somehow disrupted secondhand shopping.

I am here to tell you today that, behind the gloss of marketing slogans, they lack the sophistication, intrigue, and bargains Ebay contains. I’ve used Ebay, Poshmark, Thredup, and Etsy as both a seller and a buyer.

But I still choose Ebay (almost) every time.

I’m writing this post primarily because I think that some of the most advertised companies out there (ahem, Poshmark and Thredup) are essentially exploiting sellers, and for some reason, no one cares.

I’m comparing against Poshmark for much of my analysis simply because it’s the most common alternative to Ebay. 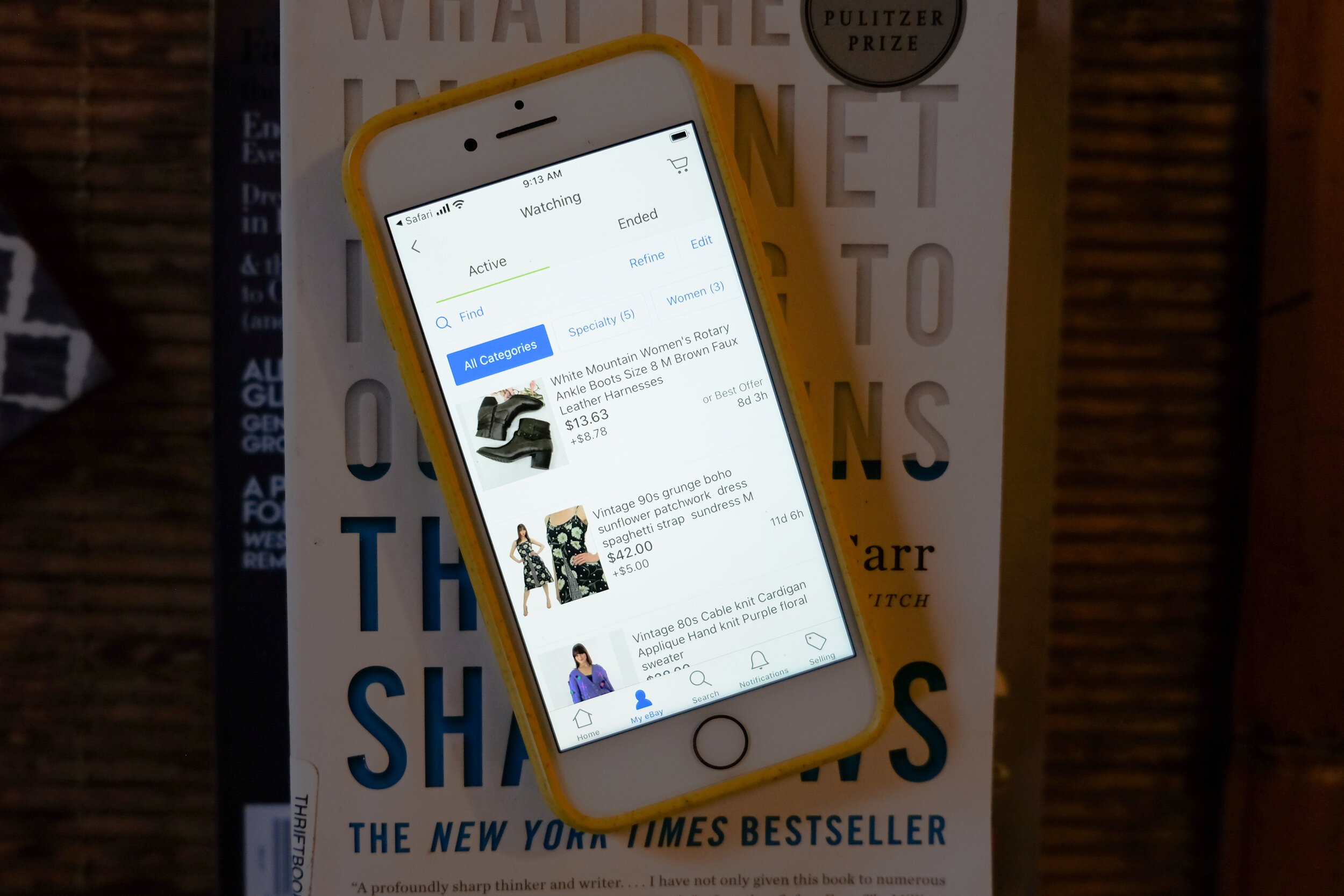 Why I Choose Ebay as a Seller

All y’all selling on Poshmark are getting bamboozled by an extremely-high-for-the-industry 20% fee that goes straight into Poshmark’s pockets. Compare that to 10% on Ebay, a rate that has scarcely changed since I made my first sale over ten years ago.

Ebay has greatly improved their shipping process, and has gotten good at predicting how much your item weighs based on your listing title and category, which means both seller and buyer can select their preferred shipping option and Ebay will charge the actual shipping cost. You can print labels on your home computer.

Unlike Poshmark, images do not have to be square, and whether you’re posting from the app or your computer, it’s just as easy. Ebay also automates a lot of the process and helps you find similar items as you list in order to price the item fairly.

You can list your item as an Auction or as Buy It Now, with or without a “Make an Offer” option. They also recently added an option – previously only available on Poshmark – in which you can make an offer to potential buyers who are following the listing.

Due, I’m sure, to a better search interface, among other factors, items I list on Ebay tend to sell more quickly than when I list them on Poshmark. The social sharing aspect of Poshmark privileges people who spend a lot of time interacting with the site, while Ebay is old school in that its main goal is to make selling convenient.

Ebay has made selling internationally super simple through their Global Shipping Program. If an item sells to someone outside the country, you can ship it to their processing facility and they’ll handle the Customs forms. 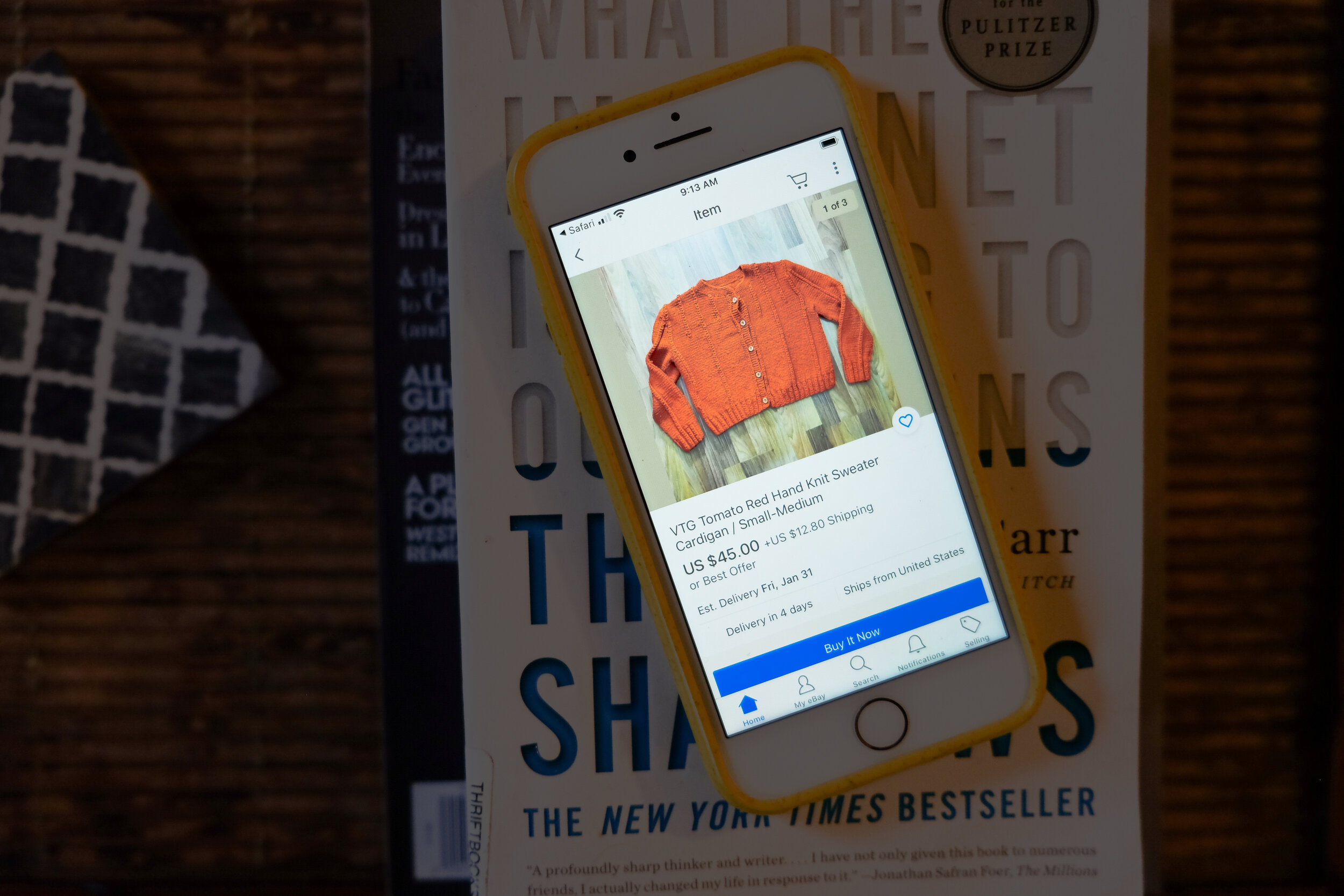 Why I Choose Ebay as a Buyer

Because the listing process is so precise on the seller end, it is very easy to narrow your search by dozens of factors, and generally I have found that the results are accurate. Compare that to Thredup, which is just a wreck in terms of their search engine, and Poshmark, which does ok but leaves out a lot of relevant listings depending on how you word your search query.

Because Ebay has a very reasonable commission split with sellers, items are often priced at least 10% lower than they would be on other sites. Some vintage sellers, for instance, sell on both Ebay and Etsy, and their Ebay prices are almost always lower. The Auction, Buy It Now, and Make an Offer options mean you have more ways to procure a good deal, as well.

Thredup is almost not worth mentioning here because their prices are, frankly, obscene.

Unlike Poshmark, you can actually communicate directly with Ebay sellers through their Messages interface. I’ve had issues with Poshmark sellers in the past that could have been resolved if there had been a way to send a direct message. It baffles me that Poshmark is so tightly controlling this aspect of their business.

You can also use send messages to sellers on Etsy.

I once ordered something on Poshmark that I expected to receive in a maximum of 7 days since, as a seller, I was under the impression that all orders were required to ship out in 3 business days. The seller didn’t ship the item for 7 days, and as a result, it was either lost or stolen from my front lobby because I wasn’t home. I had to go through a ridiculous back-and-forth with Poshmark customer service to get my money back (it could have been resolved if I had had the capacity to contact the seller to further delay shipment).

Ebay lets the seller choose a ship time, in a range of 1 to 3 business days, and expects sellers to uphold their own standard. This means that you can actually know when to expect your item, and file a complaint if something arrives late.

For social media influencers who can direct would-be buyers to their online store, and who tend to attract a younger audience, Poshmark and other youth-oriented sites like Depop can be a great option.

But if you’re looking to widen your net of potential buyers without giving up a large portion of your profits, Ebay is, hands-down, the better option. With better search tools, better rates, better shipping controls, and international options, there is honestly no reason to fall for the marketing gimmick of Poshmark. 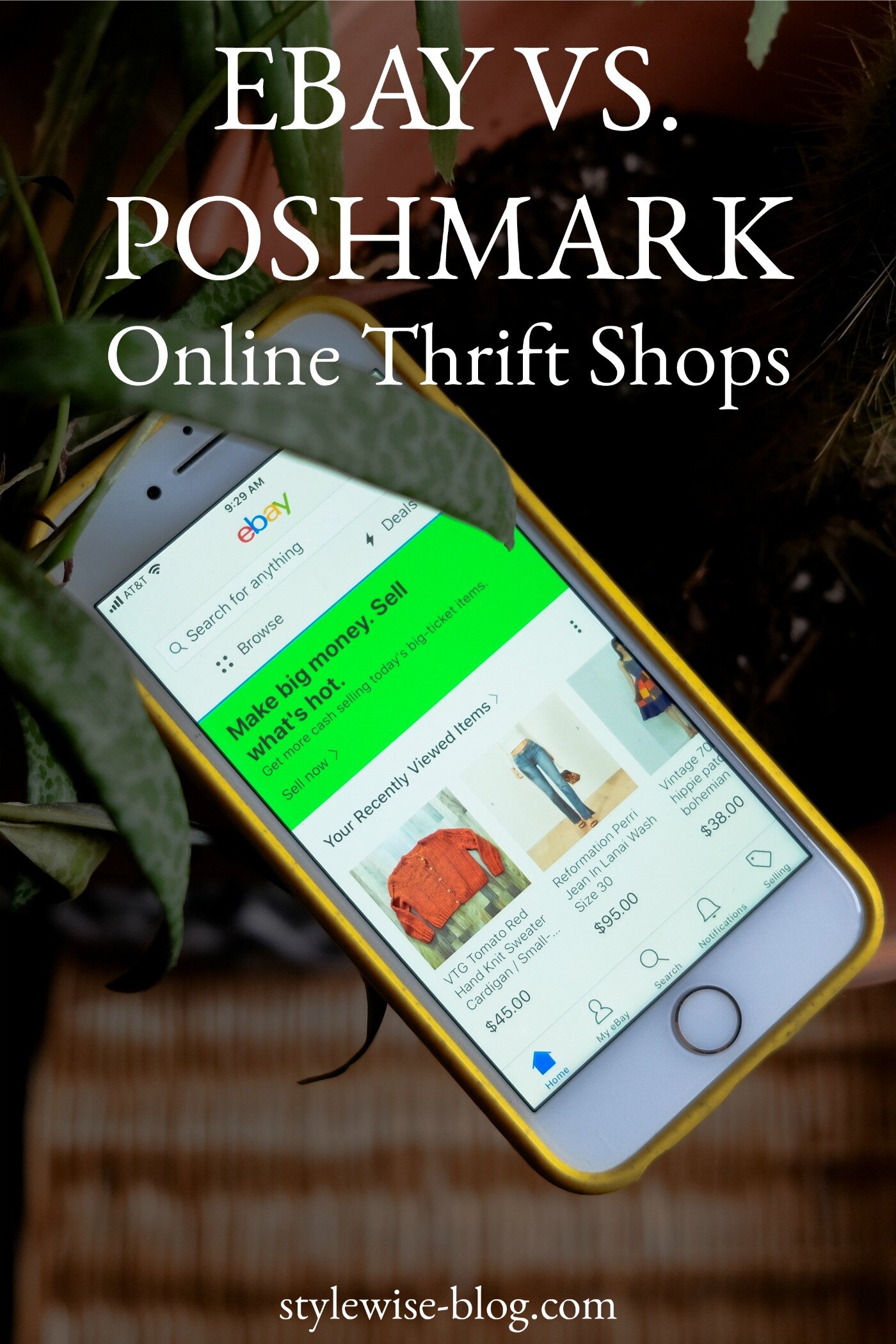 Great article....I agree with you totallym thanks. I always end up back on EBay...mostly as a buyer for all the reasons you clearly stated. Thanks for your research.

Thanks for reading. Glad to connect with another Ebay fan.