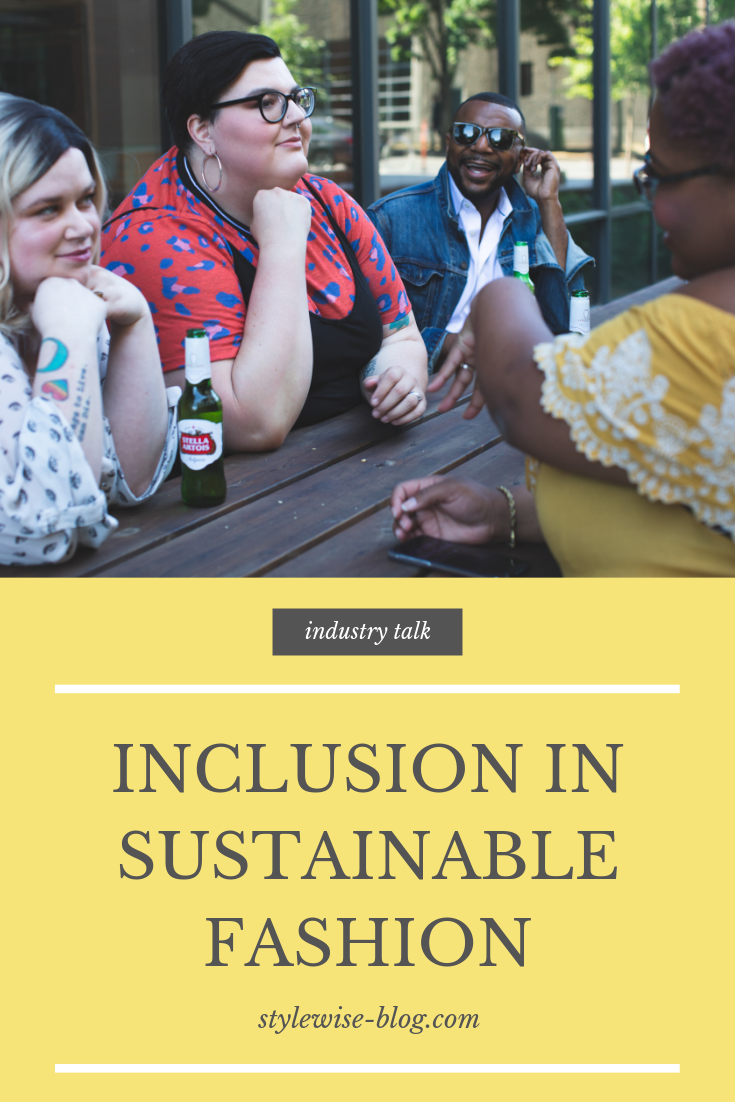 This free stock photo is part of a series created to depict more diverse bodies in the media. You can check out the series here: AllGo – An App For Plus Size People on Unsplash

I’m republishing this post from a couple years ago in response to a set of Instagram Stories made by Marielle Elizabeth on lack of size inclusion in the ethical fashion industry.

You want the short answer or the long answer?

The short answer is that I have yet to find an ethical retailer that makes clothes my husband fits in.

The long answer is that I’m frustrated. Daniel, despite his good intentions and desire to shop ethically, literally can’t. That’s because ethical retailers like Everlane, Krochet Kids, Thought, and more either don’t carry men’s clothing past XL or they only carry “slim fit” and “athletic” silhouettes, as if all men spend a lot of time drinking Muscle Milk and beefing up their pecs at the gym while managing to keep their wastes taut and trim.

I haven’t struggled with my weight the way many people – through a combination of absurd social expectations, genetics, stress, and other factors – have, and do. But I watched my mother struggle to feel like she was enough: that she’d lost enough weight, that she looked right and acted right and dressed well. And I watch my husband try to juggle the crushing expectations of academia with the equally crushing, superficial expectations of our culture when it comes to physical appearance.

It’s not fair that people who don’t fit culturally-dictated ideals around body type, weight, race, able-bodiedness, and beauty are excluded from participating in an industry advocates like myself have, for too long, held up as the ethical standard.

As I mentioned in my post about price being a barrier to entry into the ethical fashion space:

…marketing that claims we can “buy our way to a better world” implies that people with less income are helping less than the people who can afford “the best,” whatever that may be in context.

By the same token, any rigidly held ethic that reinforces an idea that people who shop from exclusively ethical retailers are somehow more moral – or just plain better – than people who, either by choice or by lack of access, don’t, ignores a set of wide-ranging individual and systemic reasons why someone wouldn’t make this choice. We alienate a huge portion of our allies in the quest for a more abundant world when we forget that it is always privilege that leads us to luxuriate in our carefully curated take on consumer ethics.

This is why I’m not an ethical purist.

But back to the topic at hand. I totally understand that startups prioritize middle sizes before they move outward on the spectrum, trying to balance consumer demand with costs and predict what sizes will actually sell through. But 2/3 of American adults are considered plus size, which means at least a portion of them are bound to need sizes above XL in silhouettes that account for the fact that they aren’t body builders, and I honestly don’t understand why companies – especially the well established ones that brand themselves as ethical – aren’t accounting for this.

In the years since I originally wrote this essay, brands like Sotela have done a really good job of creating transparency around pattern making and size grading in the women’s fashion space and companies like Tomboy X have built a whole brand around celebrating all gender expressions and sizes, which makes it even more clear that the so-called difficulty brands experience around creating more expansive sizing has more to do with priorities than with financial capability, especially at the level of a national or international brand.

These conversations have been pushed forward by a number of people in the ethical fashion space, including Shanny Doots, Nora, Bea, and Marielle Elizabeth (and I’m sure many more). Thanks to more visibility around these issues, I have started to include more size inclusive brands in my shopping guides, though I’ll say that doing research for those posts makes it even more apparent how limited the options continue to be.

But are there men talking about size inclusivity? Or have we, despite our good intentions, left them out of the conversation altogether?

My husband tends to fault himself when things don’t fit, and he has carried a burden of guilt over all of these years that I have advocated for more thoughtful fashion.

I remind him that the guilt is not his to own, that there is no such thing as being “unethical” in your purchases when you literally have no viable options.

I don’t feature ethical men’s fashion because my husband has been systematically excluded from participating in it.

How can I review something that won’t work for the man I love the most?

There are some utilitarian basics that are produced in the USA. Daniel purchases a good amount of his t-shirts from Bayside, for instance, but other than that, we haven’t had much luck. I told him a long time ago that I don’t judge him for not converting everything over to responsibly sourced and fairly made. Like I told my sister once when we were swimsuit shopping:

“Clothing is made for bodies, bodies aren’t made for clothes.”

We shouldn’t be expected to conform our proportions to an industry standard. We shouldn’t let inanimate clothing make us feel like we’re nothing. Before mass production, clothing was made-to-order by tailors who took our individual measurements. Clothing was made to flatter bodies that sometimes didn’t match the golden ratio, and that was ok.

The retail industry – even the best-intentioned companies – prey on our persistent feelings of guilt, shame, and self-disgust to get us to keep buying more, trying more, throwing out more. In a world of ready-to-wear, where fit standards were never based on real bodies anyway, we must remember that we matter. We matter the most, because we’re the ones buying and wearing – living in these clothes and in these bodies. That means we have a right to lobby for our worth, our voices, and our agency.

I want men – and everyone else – of all shapes and sizes to benefit from ethical fashion, to be a true part of this community. But I can’t in good conscience offer resources that have no relevance to the man who is my other half.

It is for this reason that I have been seriously questioning what it means to maintain a clear set of ethical and sustainable production standards while also keeping in mind broader ethics questions around inclusion and representation.

They aren’t always the same thing, after all. I think one solution is to clarify our terms. Words like “ethical” are too broad to describe what we mean, and the end result is that a number of important ethical questions are often ignored in the “ethical” fashion community. Ideally, we wouldn’t have to choose between something that’s sustainably made and something that honors the full spectrum of human dignity and human needs. But that’s not where we are.

So I’ll continue to pursue ethics in its many forms, with an understanding that sometimes the available choice doesn’t work for everyone, and is merely good enough.